When I got home the other night, there was a voicemail message from my longtime friend Roger St. Pierre, wishing me a belated happy new year and wanting to catch me up on the news. As usual, I wondered what country he was calling from–because Roger is a British freelance journalist, and one of his specialities is travel writing. Dude has the wanderlust of a thousand men! You know–today, St. Croix; tomorrow, Antarctica.

Another of Roger’s journalistic specialties is music–and that’s how we met.

When I started reviewing records and interviewing musicians for JazzTimes and Billboard, not being a musician I knew I damn well better start getting educated about my subject. (I remind you that this was B.I–Before the Internet.) So I began to amass a reference library of books about music. There was no science to it: whenever I saw a book that looked cool and had a great price, I’d buy it.

Just one of the shelves where my music reference library lives. Like I said: there was no science to it. Behold the eclectic-ness! (click to enlarge) 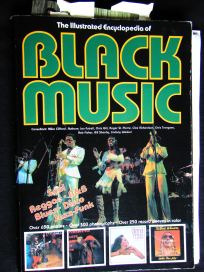 My well-worn copy of TIEOBM, stuffed with assorted relevant clippings. (click to enlarge–and note Roger’s name on the cover)

Anyway, there were eight authors listed for The Illustrated Encyclopedia of Black Music, and although the publishing company was Harmony Books in New York, the copyright page stated that all correspondence concerning the book should be addressed to Salamander Books, in London. This became relevant because a year or so after I bought the book, I took my second big-girl vacation: a return trip to London.

My first-ever vacation had only been the previous year, in 1986. When I’d received my tax refund that year, I decided to dream BIG: “Come on, DP.” I said to myself. “Think of a place in the world where you always, always wanted to go.” I squeezed my eyes shut and thought hard. And I came up with… LONDON!!

(Don’t ask me why a black girl born and raised in the South Bronx would dream of England. At the time, I would have blamed it on my big brother Pat, who as an Air Force man had been all over the world. He was full of stories and slang from the places he’d been, one of which was England. He’d say things like “ta” and “how about a spot of tea?” in his best British accent, and he liked to watch old British movies. Decades later, though, after I discovered that my biological father’s people were from Barbados, I considered that the perfect explanation for my Anglophilia. Case closed!)

Fast forward to 1987, and planning my second trip to London. By that time, I’d been writing articles for about a year; in fact, one of my early articles–a review of Baba Olatunji’s album Dance to the Beat of My Drum–had been for a British music magazine called WIRE. So I decided to use the trip as a chance to do a little business. First, I wrote to my WIRE editor Richard Cook, asking if we could meet. Next, just for the hell of it I wrote to Ray Bonds, who was listed as the editor of TIEOBM, at the Salamander offices. He was kind enough to write back, inviting me to his office–plus he provided the contact information for some of the book’s authors! Luckily, with a few weeks left before my trip, there was time to write letters to a few of the TIEOBM authors, one of whom was Roger St. Pierre. Roger wrote back, inviting me to meet him during my visit to London. It turns out that Roger was a freelance journalist–like I wanted to be–specializing in not only music, but travel, cars, and cycling.

When I arrived in London, I met Richard Cook for lunch, and visited Ray Bonds at the Salamander offices, where he gave me a copy of The Illustrated Encyclopedia of Jazz–making me the proud owner of both the British and the American editions! And on May 16, I met Roger St. Pierre at the Stockwell tube station. He’d brought along his two children, Nicole and Richard, and their dog Sooty. He drove us to Kent, where we had lunch in a 14th-century pub, and then took a walk in the countryside… where I touched my first cow. (I’m a city girl… what can I say?) Afterwards, we went to his house in London, and I’ll never forget his upstairs office, where he had thousands upon thousands of… records!

L-R: Cows; Nicole; Sooty; DP; and Richard–just chillin’ in the countryside in Kent, England, May 1987. (Click to enlarge and see the herd of cows!)

Fast forward even more, to the twenty-first century. Nicole and Richard are now grown up, and Roger is a proud granddad. Over all these years, we’ve stayed in touch via long letters and telephone calls, but now it’s through long emails and long telephone calls. Plus a visit if Roger passes through New York on his travel assignments.

What a friend. What a mentor. I’m still glad that that one little music book brought us together.