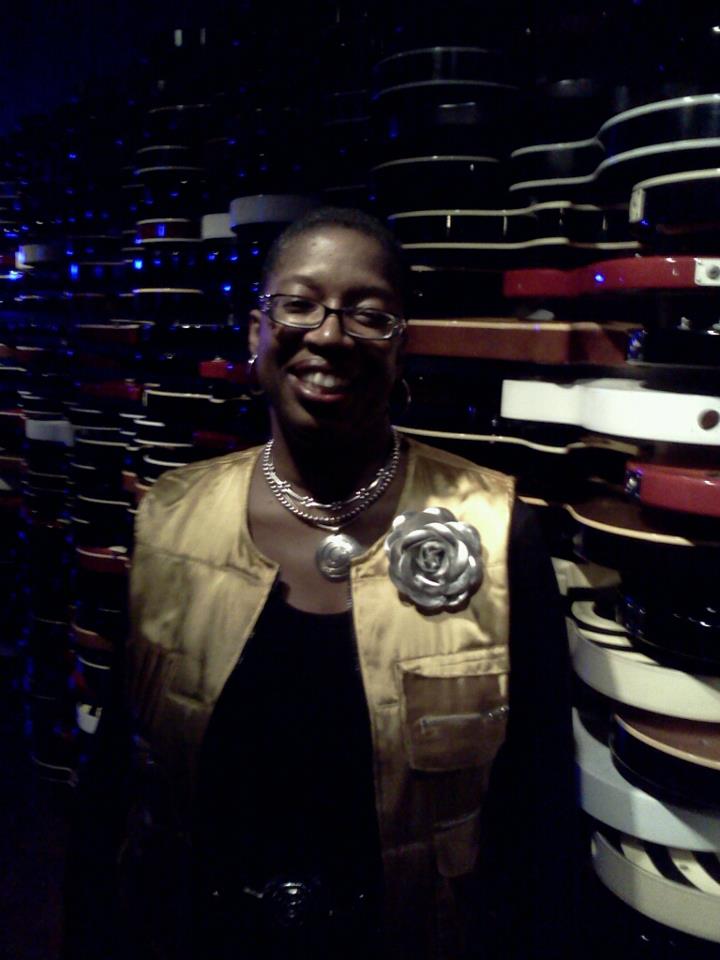 Don’t get excited–I didn’t exactly see the performance. But a couple of weeks ago, I walked into the Museum of Modern Art (MOMA) in New York City with some friends, and BAM! I saw a huge display with their name on it! I was so amazed that my embarrassed companions had to sit and wait until I calmed down!

It was the space in which would be held their upcoming, rare, performance (sold out, of course) right there. At the museum.

Coming so soon after I’d made my blog entry on my Kraftwerk memories and a rare online interview I found with Ralf Hütter, can ya blame me for believing that this was all because of me?

ANDREW COLLINS: If I gave you an acoustic guitar now, could you play a tune on it–are you good on the guitar?

RALF HUTTER: No, I play keyboards.

AC: So that’s your only instrument, as it were.

RH: Yes. And… the keyboard as a steering wheel.

AC: So it’s not the actual playing of the keys that matters; it’s what you get at the other end of it.

PLACE: At home, somewhere in the Bronx.

SCENE: Minding my own business, as usual.

In comes my nephew Kevin. With an album under his arm, as usual.

Come check this out, he says.

We go into his room, where the little brown record player has been working overtime lately with all the albums Kevin’s been bringing home. He pulls the record out of the sleeve and puts it on the turntable.

Just listen, he says. This is the JOINT!

As the record starts, Kevin starts dancing. (I knew this meant that all his crew were dancing to it too and that I was late learning about it. Typical.) I grab the album cover. Against a black background is one of those old-school-looking, sepia-toned photos of four clean-cut white guys in suits, hair slicked back, staring off into space. The first line of the title is Kraftwerk. The second line is Trans-Europe Express. For a moment, I wonder which is the name of the group and which is the name of the album.

The track he’s playing has a strong, bouncing beat, a catchy melody, and not a lot of words. As soon as I hear the words, though, it’s obvious that the title of the song is Trans-Europe Express–so Kraftwerk is the name of the group.

Sounds good, I say after a few minutes.

And then Kevin drops the bomb:

Those are not real instruments, he declares. They’re all synthesizers.

Oh come on. All of them?

Hmph. The only electronic trickery I know of in the music I’ve heard so far is overdubbing, where they layer on voices and instruments, and stereo, where different sounds are split between the speakers. And of course there’s Stevie Wonder, who is crazy in love with synthesizers, and his music is all over the radio these days. But an album with ALL synthesized instruments? That’s never been done before that I know of, so I’m not quite ready to believe Kevin.

I pull out the inner record sleeve to hunt for proof. On one side of it is another hand-colored photo of the group, this time posing under a tree seated around a square table covered with a red and white picnic tablecloth. The reverse side is yellow, with music staff lines covering the page. On this side is the list of the longish tracks and the personnel. Sure enough, there are no instruments mentioned. And it isn’t even clear who those four dudes are; it takes a few minutes of reading to get it straight. I figure they are Ralf Hutter, Florian Schneider, Karl Bartos, and Wolfgang Flur–the four whose names are credited as “electronics + voice” and “electronic percussion.”

Wow. No real instruments? This is too much to process. Although I have to admit Trans-Europe Express sounds futuristic enough to believe it’s electronic, I need to hear all the tunes before I can believe that someone would do a whole album that way.

Well sure enough, about 40 minutes later I’ve heard the whole album and it’s brilliant. My favorite, and the one that impresses me most, is Franz Schubert, because it sounds classical orchestra-like. At four minutes 25 seconds, it’s also the shortest tune on the album. Then again, I like the longest one too–the nine minute-plus Europe Endless.

Once again, Kevin has stretched my musical boundaries… and Kraftwerk has opened an electronic door that will never close.

MORAL: Sometimes you gotta surrender to the technology and then embrace it… Because it just might be here to stay!